"I once lived in China and they had no clue where the island I was born in was, or where the islands I affiliated with (through parents and/or grandparents) were. I had to say:

Probably got that wrong all these years later but basically,

" I come from the Caribbean Sea."

Caribbean-Canadian Tonni Ann Brodber is the Deputy Representative for UN Women.  This UN organization is dedicated to gender equality and the empowerment of women. They are a global champion for women and girls, established to accelerate progress on meeting their needs worldwide. It is truly an honour to be able to speak with Tonni on a personal level, getting to understand the woman behind the such a powerful role.

BC: This is no light work! Tell me about the core of what you do and what motivates you to keep pushing.

TB: "The foundation of what I do is empowerment and social justice. The belief that all people deserve the opportunity to acknowledge and fulfill their potential. I am motivated by a drive to overcome injustice and really all the people who came before and those now who work for justice. I just watched Raoul Pack’s documentary ‘I am Not Your Negro’ about James Baldwin and so much more. These people that we deify, who are oh so human and driven by a need to act, to create the kind of world they would want for the next generations."

I guess it must be almost impossible to leave work at the office when you're dealing with such grandiose matters. Tonni's vision and efforts can influence major social change in the world! So even though I want to learn about the fashion-loving woman behind the title, I am still so drawn to learn more about her perspective on Women and society.

BC: You've dedicated your life to helping women. What is is about them that inspires you?

TB: "Resilience. The balance that is both softness and strength. When a woman is grounded in her strength she can conjure all creation to the fore. Yet for some reason despite the fact that women fostered, co-led and participated in many liberation movements, there remains the belief that women are of unequal value, even among women."

I nod along with every sentence. I tell her that her words are like food for the soul, while holding back the urge to stretch my hands to the sky, yelling "Preach!" No doubt this woman is a Caribbean daughter. She has the vibrant optimism of islanders, speaking with warmth and boldness.

BC: How have your Caribbean roots influenced the way you live?

TB: "I once lived in China and they had no clue where the island I was born in was, or where the islands I affiliated with (through parents and/or grandparents) were. I had to say "wo jia le be hai ren" (probably got that wrong all these years later) which basically means, "I come from the Caribbean Sea". I love that.

I am the product of a powerful story of survival at our best. When I think of who came and from whom I am created, I can’t help but find joy in their determination to eke something out of what was quite horrible. I like the country of my birth, I am forged from the love of liberty. The country of my grandparents has brave forefathers who sowed the seeds which created us all. So, I live that joy, I live that connection to those who came before and the places that they came from. I live that connection to what will come and a fundamental understanding that my actions are important, as were all who built this space, I stand on their shoulders as do we all and I want to keep building."

BC: Clothing is so closely connected to identity. Does fashion play a big role in your life?

TB: "Fashion gives me joy. I love that I can express my history, present and future through what I wear. Pin-pointing my style is a hard one…Caribbean chic? Is that a thing? Not quite neo-soul but I’d like to think colourful, elegant and sexy. I love bright colours, flowy material as well as clothes that hug my curves. I have plenty and I have learned to enjoy them." 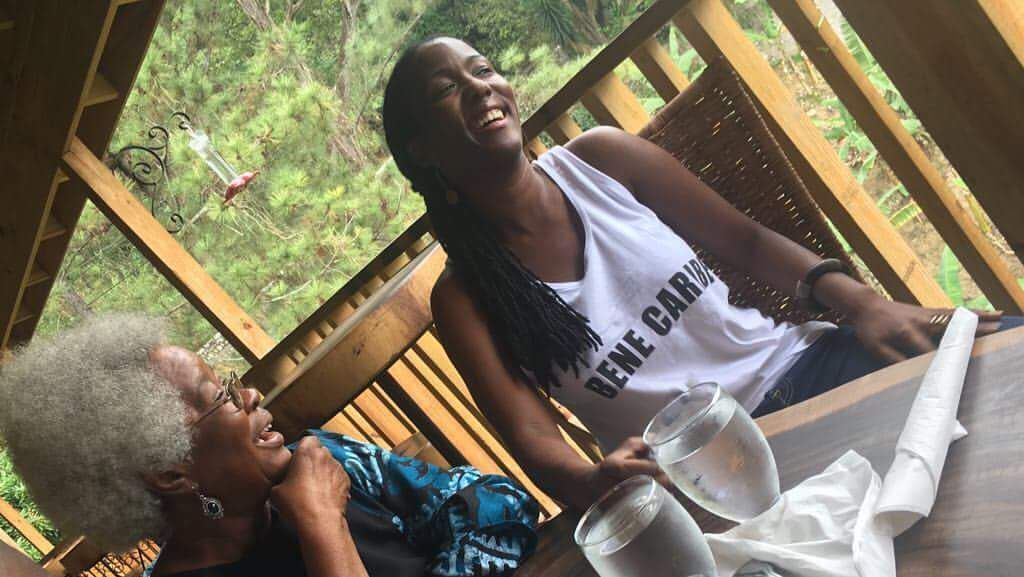 BC: What's the most memorable item of clothing you ever wore?

She has to consult with her friends, asking them what she has worn in the past that stood out to them. Then she lists four looks:

1.     A traditional West African style skirt suit I had made with Chinese silk my mother picked up for me eons ago in Beijing.

2.     A red and purple colourful dress I bought on gilt.com, which I wear with earrings I bought in Tanzania.

3.     A red jacket with peaked shoulders I got from Zara, which I pair with an African inspired long dress with a red and grey print a girlfriend and I bought in Brixton.

4.     My Bene Caribe white skirt with a colourful bird on the side.

Aside from my obvious glee over Bene Caribe making her list of impactful looks, what stood out to me was how her wardrobe has come together from all parts of the world. It reminds me of the Caribbean again; how we are this perfectly imperfect mingling of so many cultures. We have a unique understanding among us, with countless references for words we use, foods we eat and behaviours we might have. Yet to some of the rest of the world, if we are unknown, or even known for just one thing, we can be so misunderstood.

BC: What would you wish people knew more about when it comes to the Caribbean?

TB: "I think I am at the stage where I guess I am more concerned about us knowing ourselves first. I wish we all knew more about each other and how connected we are i.e. that we get beyond the nationalism towards something bigger. I wish people knew that the potential for Wakanda lies within these rocks. That we are more than just beautiful beaches and carnivals. I wish Caribbean people, in particular, recognised the power that lies within us to create spaces where all of us could choose to remain. I wish those, especially those in Africa, Asia, the Pacific and Latin America, knew what we have managed to create so that we can share how we can be even better."

Speaking with her makes me beam with Caribbean pride, and feel empowered about my woman-ness. She is absolutely right. We must really know ourselves first before anything else. And who we are as Caribbean women, is immense, we just have to learn how to tap into our potential.